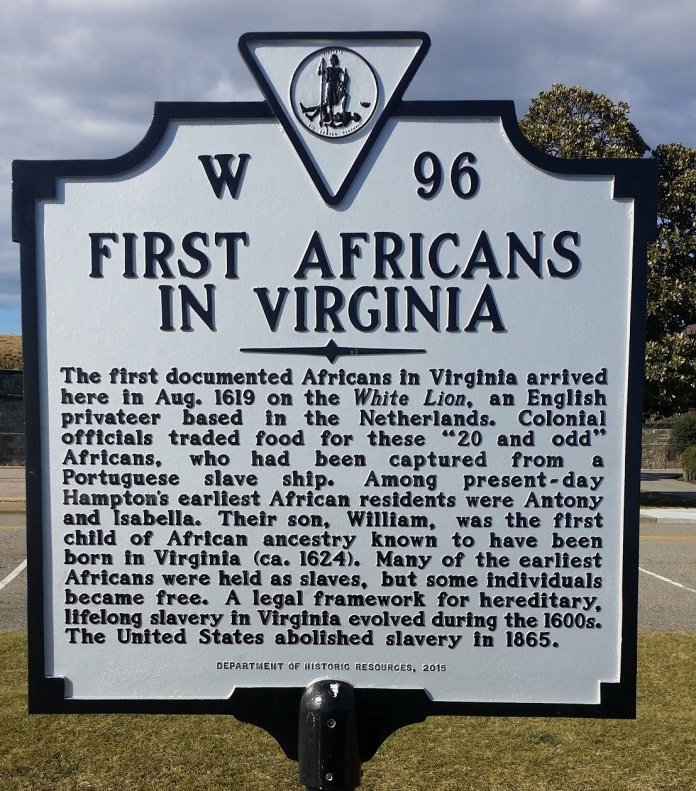 FYI: This is the last of our Wednesday series that highlights historic Middle Passage/UNESCO Site of Memory markers that have been installed and those locations where a remembrance ceremony was held since MPCPMP incorporated 9 years ago. MPCPMP is/was involved in the planning for the installation of most of these markers (indicated by an * next to the state name), and other organizations are/were responsible for some.

National Park Service research on Virginia explains that, “Thousands of years before the first European colonists arrived in Virginia, an indigenous population inhabited the coastal plain, leaving a faint imprint upon the land” and a history “largely unrecorded.” When the English arrived in the spring of 1607, they established a colony on a peninsular they called Jamestown. This was the first permanent English settlement in North America. Within the first two years, famine, disease and a tenuous relationship with the local Powhatan Indians as well as a harsh winter in 1609-1610, known as “The Starving Time,” during which more than 100 people died, led the remaining colonists to prepare to abandon the settlement. However, in 1610, a fleet arrived bringing more colonists and a stockpile of supplies, and by the fall of 1611, lessons from the indigenous people taught them to harvest corn, insulate their dwellings, and other valuable survival techniques. In 1612, John Rolfe, introduced a new strain of tobacco to the colony, and that cash crop would soon turn the struggling settlement around.

Within its first decade, eighteen or nineteen plantations had been established, mostly along both sides of the James River. In 1619, the first documented Africans arrived. Over decades, many more followed, “brought directly to river plantations on the James, York, and Rappahannock rivers as well as to ports at Yorktown, Jamestown, Richmond, and Fredericksburg.” The entire development of the economy and social structure of the colony/state of Virginia was based on tobacco production requiring extensive and intense labor. By the end of the 17th century, Virginia was committed to slavery as the primary means of obtaining its work force. It had become a “slave society,” rivaling only South Carolina with the number of captive Africans arriving on its shores.

In addition to the Jamestown settlement that was an arrival site and served as the colonial capital for Virginia until 1699 (when Williamsburg became the capital), the following is a list of the six other documented Middle Passage arrival sites in the colony; those are places in Virginia where Africans first placed their feet after leaving the African continent:

1/2. Point Comfort/Hampton – In the summer of 1619, two English privateer vessels sanctioned to operate by their government but, really, not much more than pirate ships, attacked a Spanish vessel on its way to Vera Cruz, Mexico, carrying 350 enslaved Africans from the Kimbundu-speaking region of West Central Africa who had been “crammed into the slaver — men and women — and about a third of them had died on the brutal voyage.” The English stole 50- 60 people, and in late August, 20-30 of these Africans arrived on one of the ships, called the White Lion, at Cape Comfort (later called Point Comfort). Established in 1619, and originally named Elizabeth City, Hampton, in which Point Comfort is included, is technically the oldest, continuously occupied English North American settlement. John Rolfe, Secretary for the Virginia Colony, recorded that, “About the last of August came in a dutch man of warre that sold us twenty and odd Negars.” These captive Africans were traded to the English colonists and forced to labor in the English settlement.

3. Yorktown – Founded in 1691, Yorktown was established by Virginia’s colonial government to regulate trade and to collect taxes on both imports and exports for Great Britain. By the early 1700s, Yorktown had emerged as a major Virginia port and economic center and remained the colony’s principal port city until 1779. Its thriving tobacco industry, that needed more and more Africans to work the land, “provided the historic ground where Virginia’s slave culture took root and blossomed.” The “rich, alluvial soil” in the Yorktown region allowed planters to grow a better quality of tobacco, called the York River Leaf, that could not be grown anywhere else. The result was a tobacco in great demand, therefore, more profitable. Historian Taylor Stoermer says the “Sweet-scented tobacco was worth five times more than the bitter Orinoco strain.” Soon, planters “were producing such bountiful crops of lucrative sweet-scented tobacco that their resulting appetite for black labor created what for 50 years was by far the biggest and busiest slave market in Virginia.” By the mid-1700s, the demand for these crops “had drawn at least 163 ships carrying 31,304 captive Africans to the York River”; most of them were sold at Yorktown “in sales so frequent and large that they consumed more than two-thirds of all the blacks brought to Virginia.”

4. Richmond was established by William Byrd as a major trading center at James River Falls (1737), and when the Virginia colony expanded westward, it became the state capital (1779). Identified in the Voyages database as the Upper James River, this area encompasses Richmond, Henrico County, and places along the James River. Between 1733-1772, fifty-four ship documents reflect that 12,468 captive African children, women, and men were delivered to Richmond and plantations on the upper James River. They embarked from Gambia, Angola, Benin, Nigeria, Ghana, the Bight of Biafra, the Guinea Islands, Sierra Leone, Ivory Coast and other African ports.

Richmond’s participation in the trade resulted in a thriving business enterprise with high profits. As a natural conduit, the James River connects Atlantic Ocean seaports with the city. Africans who were forced to journey the triangular trading route from Liverpool-Africa-Richmond had a drop-off point at Manchester Dock and, then, were herded to containment pens and sales locations in the town’s Shockroe Bottom area.

In 1778, after the state implemented its ban on the importation of Africans, Virginia ceased its involvement in the international trade and developed as a principal supplier in the domestic human trade. During this time, the agricultural landscape of the Chesapeake Bay area was changing because of Eli Whitney’s invention of the cotton gin, the growing global demand for machine-made textiles that increased the value of cotton, and Napoleon’s sale of the Louisiana territory that opened up a vast area for U.S. expansion and development. In Maryland and Virginia, growing tobacco had exhausted the soil, and “plantation owners . . . came to realize there was more money to be made in selling human beings . . .” Virginia became more interested in “breeding” human beings as a cash crop and soon began to provide the labor for the new plantations that were being established in the South, especially in Louisiana. In fact, Shockroe Bottom became a “major source for the New Orleans trade, in which slaves destined for the Louisiana sugarcane fields were sold.” In the three decades before the end of the Civil War in 1865, between 300,000 and 350,000 people of African descent were sold out of Virginia, most of them passing through the auction houses of Shockroe Bottom. “In the decade from 1830 to 1840 alone, it is estimated that between 10,000 and 11,000 people were sold each year from Richmond and transported by ship, railroad or by foot, fastened together in ‘coffles’ to the sweltering fields of their new owners.”

5. Fredericksburg is an arrival site that was the principal place of maritime entry on the Rappahannock River. Sixty-four ships delivered 9,341 children, women, and men from the Bight of Biafra, the Guinea Islands, Benin, Ghana, Sierra Leone, Senegal, Gambia, Ivory Coast, Angola, and other unspecified departure sites in Africa to plantations and locations on the Rappahannock River. Some of these sites may have included Fredericksburg. While historical data specifies that ships arrived on the river, there is limited information as to whether captives were delivered to plantations or to the city port. Only one ship, the Othello (1771), identifies Fredericksburg as its recorded arrival site. Loaded with rum from New England, this ship was sent to Africa. Once there, the captain traded the liquid cargo for human beings who were taken to the West Indies where most were traded for molasses that was taken to Rhode Island to be distilled into more rum. This triangular trade route included stops at river plantations and ports in English colonies. When the Othello arrived at Fredericksburg, it brought 85 enslaved people – 25 men, 31 women, 18 boys, and 11 girls – then returned to Rhode Island with molasses, hemp, flour, and Virginia tobacco.

6. West Point -. The first indigenous inhabitants of the territory at the juncture of the York and Mattaponi Rivers, now known as West Point, called their village Cinquoteck, it was part of the Powhatan Confederation. In 1653, “in appreciation of his services to the colony of Virginia as Governor from 1635 to 1638,” John West was granted 3,000 acres, that included Cinquoteck, and called it the West Point Plantation. In April 1691, West Point was included in an Act for Ports as a British colonial port of entry that served as a tobacco port where taxes could be collected. For hundreds of years, as a port of entry, port of delivery, and port of departure for European settlers, indigenous tribes fought along these shores to retain their ancestral land, and Africans arrived in bondage, resulting in a complex and multicultural history.

Even as enslaved people rebelled in everyday ways (i.e., performing small, daily acts of resistance, such as illness, breaking tools, slowing down work), and larger ways (running away and revolts such as Nat Turner and Gabriel Prosser), slavery thrived in the state. While the Emancipation Proclamation of 1863 declared that all the enslaved in Virginia were free, it “could only be enforced in those places controlled by the Union Army” (Fort Monroe, Point Comfort). It was not until February 9, 1865, that the General Assembly of the Restored Government of Virginia ratified the proposed Thirteenth Amendment to the Constitution of the United States. On December 6, 1865, that amendment was ratified by the required two-thirds of state legislatures and slavery ended everywhere in the United States.

As of 2020, five of these locations have installed commemorative markers that honor the lives of African ancestors – Fredericksburg, Jamestown, Point Comfort, Richmond, and Yorktown. All of them have been designated a Site of Memory by the UNESCO Slave Trade Route Project. Project 1619 is planning a memorial in Hampton, and West Point has organized a marker installation committee. Please follow these links to read more about Virginia and slavery and to find resources for additional information: