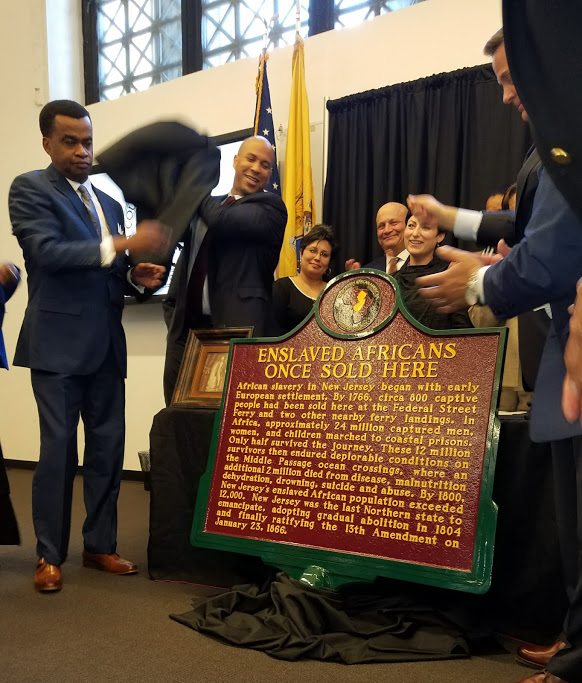 As early as 1626, the first enslaved Africans were brought by the Dutch to the region of the New Netherlands colony (which later became New York and northern New Jersey).  French privateers also participated in this early trade to the colony, bringing “enslaved men, women, and children from the Portuguese or Spanish ships that they had captured in the Western hemisphere.”  Bergen (now Jersey City), established in 1630 on the west bank of the Hudson River, was the first permanent Dutch settlement.  After taking the colony from the Dutch in 1664, the English continued the practice of chattel slavery, bringing people in bondage directly from Africa or by way of the Caribbean Islands to work the land and grow the crops, primarily wheat and barley.

Perth Amboy, ideally suited as a bustling maritime port of entry, was the British colonial capital of East Jersey and an arrival location for ships during the transatlantic human trade. Because the colony imposed no tariff on the importation of captive Africans, many traders disembarked their human cargo at this location, avoiding taxation while supplying New York, New Jersey, and Pennsylvania buyers.

Camden served as one of the primary locations for the purchases of human beings made by surrounding farmers and Delaware plantation owners and by 1766 had sold more than 800 captive Africans at three local ferry terminals owned by the Cooper family. They were often people who were ferried across the Delaware River from Philadelphia to Camden’s auction sites.

According to a 1745 census, a major portion of the enslaved (74%) lived in the more economically developed but labor scarce counties of Bergen, Essex, Middlesex, Hunterdon, Somerset, and Monmouth. In 1786, the colony banned the importation of men, women, and children from Africa, and by 1800, the enslaved African population exceeded 12,000.  In 1804, New Jersey became the last northern state to adopt gradual emancipation; however, the enslaved were not immediatey free: “Every child born of a slave . . . after the fourth of July [1804] . . . shall be free, but shall remain the servant of the owner of his or her mother . . . ”.  In 1866, New Jersey reluctantly became the last northern state to ratify the 13th amendment to the U.S. Constitution passed in 1865.

In November 27, 2017, Camden, a UNESCO Site of Memory, installed its first marker honoring the lives of African ancestors and their descendants who were enslaved in the state.  A second marker was dedicated on June 17, 2019, and the city is planning a third marker.  Perth Amboy is also a UNESCO Site of Memory, and MPCPMP has discussed the installation of a marker with city officials.  Please follow these links to read more about New Jersey and slavery and to find resources for additional information: