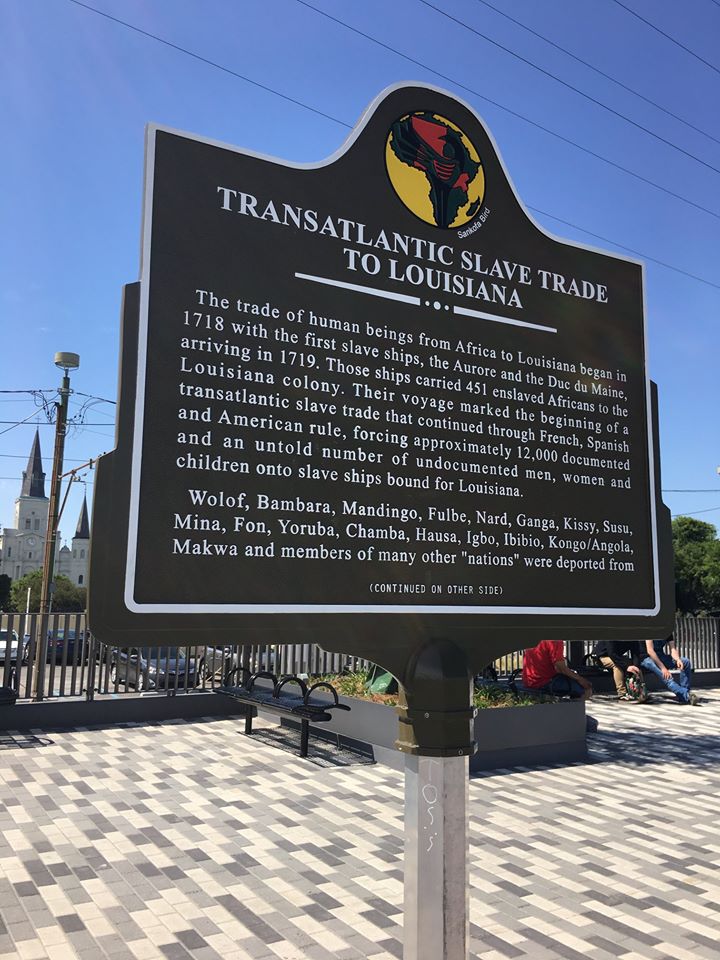 This is the 6th of our Wednesday series that highlights historic Middle Passage/UNESCO Site of Memory markers that have been installed and those locations where a remembrance ceremony was held since MPCPMP incorporated 9 years ago. MPCMP is/was involved in the planning for the installation of most of these markers (indicated by an * next to the state name), and other organizations are/were responsible for some.

The history of this state encompasses French, Spanish, U.S., British, and Confederate sovereignty from the early 18th century until after the Civil War (1865). Slavery was introduced to Louisiana in 1706 when 20 Native Americans were captured in one of the early battles between the French colonists and the Chitimacha people. In 1710, the French army captured six enslaved Africans during the War of Spanish Succession, and by 1721, “some 2,000 Africans had been imported into the Louisiana colony, primarily for work in the fields of indigo, sugar cane and tobacco.” By 1724, the Code Noir was introduced by the French in order to regulate and restrict the behavior and rights of enslaved Africans who primarily originated from Senegal, the Bight of Benin, and the Congo region, but many African cultural traditions, such as drumming, were permitted.

Compounded by the influx of refugees with their enslaved from Haiti’s revolution (1791-1804) and the Acadians (Cajuns) from Canada after the British assumed control of that territory (1713), the colony’s role as a major maritime center for enslaved Africans grew exponentially within a century with direct cultural, social, and economic connections. Cuba and surviving indigenous groups also significantly impacted the area. Plantations and farms, urban and rural communities, cemeteries, and sites of ritual related to the enslavement of Africans and their descendants are visible to this day and reflect many of these influences. After its incorporation into the territory of the United States of America with the Louisiana Purchase of 1804, the demand for labor to enable westward expansion increased. The state was the location of the German Coast Uprising (1811), the largest rebellion of the enslaved in U.S. history. Please follow these links to read more about Louisiana and slavery and to find resources for additional information: : https://64parishes.org/…/slavery-in-french-colonial-louisia…; https://www.smithsonianmag.com/…/its-anniversary-1811-loui…/