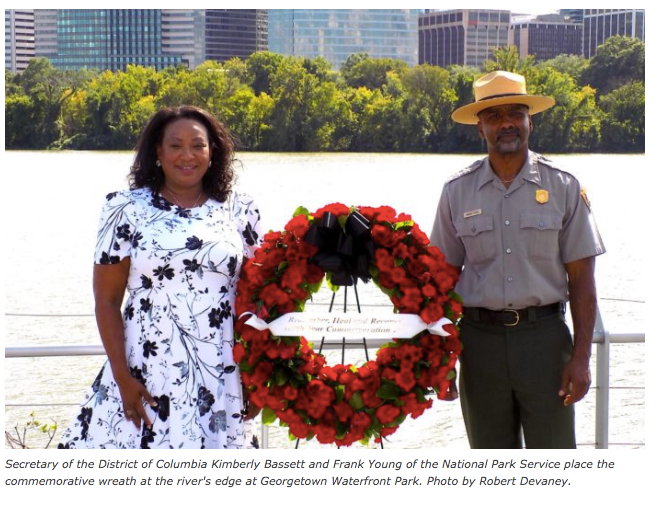 This is the 3rd of our Wednesday series that highlights historic Middle Passage/UNESCO Site of Memory markers that have been installed and those locations where a remembrance ceremony was held since MPCPMP incorporated 9 years ago. MPCPMP is/was involved in the planning for the ceremony and/or installation of most of these markers (indicated by an * next to the state name), and other organizations are/were responsible for some.

Carved out of Maryland and Virginia, both “slave societies,” the city was named in honor of George Washington, the nation’s first president and a person who held more than one hundred people in bondage. Before it became the capital of the United States, this area was originally a Native American trading center. When John Cabot arrived in 1608, many tribes had settled here, in what is now Georgetown. Congress approved the creation of a national capital on the Potomac River in 1790, incorporating two pre-existing settlements: the port of Georgetown, MD [founded in 1751], and the city of Alexandria, VA [founded in 1749]. As one of the first points of disembarkation for the enslaved, the port of Georgetown “ensured that slavery was ingrained into every aspect of life, including the buildings, institutions, and social fabric” of Washington, D.C. There were several holding pens and auction sites within the boundaries of the nation’s capital, and the District’s first official federal buildings – the Capitol and President’s House/White House – were built by enslaved Black people. Georgetown and its port remained a separate municipality within the federal District of Columbia until 1871. The demand in Europe and the colonies for tobacco grown in Maryland and Virginia established this location as one of the largest tobacco ports in the new nation, with enslaved Africans and their descendants providing the labor both in the fields and in the homes of tobacco merchants. On February 28, 2012, Congress unveiled a marker in the Capitol building to commemorate the central role played by enslaved Africans in its construction. Please follow these links to read more about Washington, D.C., and slavery and find resources for additional information: http://www.gaahlp.org/about/introduction/
https://www.whitehousehistory.org/the-complexities-of-slave…