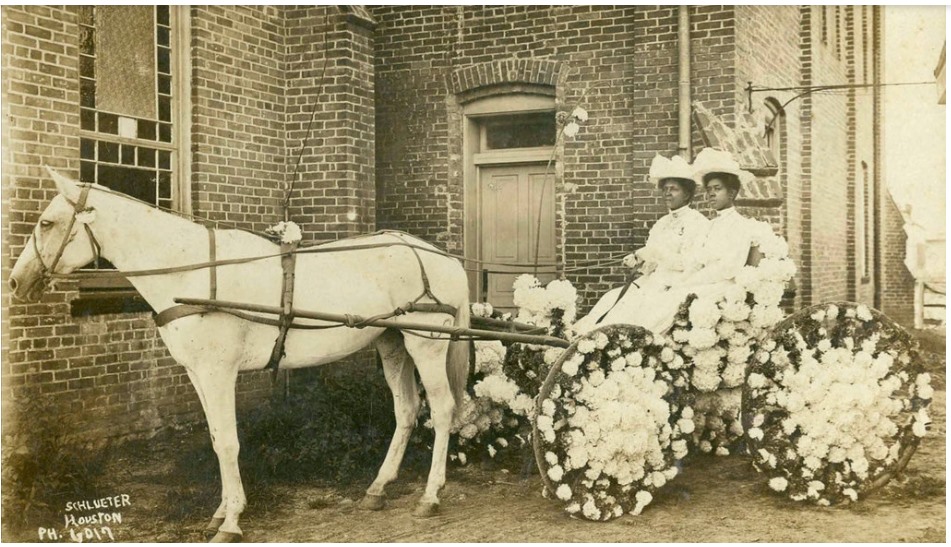 The earliest known person of African descent to arrive in present-day Texas was Estevanico, also called Esteban, a Muslim born in Morocco. At an early age, he was sold into slavery in 1513 by the Portuguese who were on Morocco’s Atlantic Coast, and in 1527 became part of the ill-fated Spanish expedition led by Panfilo de Narvaez, that landed in the Americas in 1528, helping it to “survive nearly eight years of hardship in the Texas wilderness,” serving as scout, translator, and mediator.

Between 1816 and 1821, pirates, privateers, and revolutionaries controlled the Texas Gulf Coast (most infamous the Lafitte brothers and the Bowie family, responsible for providing labor to both Texas and Louisiana for economic development). These experienced seamen traveled the Gulf waters seeking adventure and quick profits by plundering vessels and raiding other smugglers. “This area was close to the shipping lanes in the Gulf of Mexico and to the slaving ports of Cuba. Cuba was a major depot for the African slave trade into Latin America in the early nineteenth century. Since the island was only 800 miles from Galveston. It became the major source of African slaves for the Anglo-American colonists after 1821.” These men hid captive Africans and other contraband at Galveston Island, Galveston Bay, and other locations along the coast.

Although “Mexican governments did not adopt any consistent or effective policy to prevent slavery in Texas” (and there certainly were some enslaved Africans when the territory was under their control), chattel slavery was really established after 1821 with the arrival of settlers, who, for each enslaved person they brought to the colony, were guaranteed eighty acres of land. The land was expansive, and Africans were needed to grow cotton, by then “the most valuable commodity in the Atlantic world.” Stephen Austin, who brought the first 300 families to his settlement, the Austin Colony, made this clear in 1824: “The principal product that will elevate us from poverty is cotton, and we cannot do this without the help of slaves . . . The first census in Austin’s colony in 1825 showed 443 slaves in a total population of 1,800.” Later, he wrote: “Texas must be a slave country. Circumstances and unavoidable necessity compel it. It is the wish of the people there, and it is my duty to do all I can, prudently, in favor of it.”

By 1836, when the Anglo-Americans gained their independence, establishing the Republic of Texas, the “peculiar institution” was entrenched, with approximately 5,000 enslaved Africans. In late December 1845, when Texas joined the United States, the population of enslaved Africans had grown to 30,000. “After statehood, slavery grew even more rapidly. The census of 1850 reported 58,161 slaves, 27.4 percent of the 212,592 people in Texas, and the census of 1860 enumerated 182,566 slaves, 30.2 percent of the total population,” many coming with their owners from other states and many others sold through the domestic trade to work as field hands, house servants, livestock handlers, and skilled craftsmen. Although the U.S. banned the importation of captive Africans in 1808, approximately 2,000 men, women, and children were brought to the colony/state between 1835 and 1865 through the illegal African trade.

Two and a half years after President Lincoln signed the Emancipation Proclamation, “freedom” came to Texas, and slavery formally ended after June 19, 1865 (celebrated as Juneteenth today), when Gen. Gordon Granger arrived at Galveston with occupying federal forces and announced emancipation.

Because of its complicated history, information on African arrival for the state of Texas is fragmented and incomplete. To date, only Galveston and Deweyville are documented locations. The Galveston Historical Foundation installed its Middle Passage marker in 2017, and Galveston is a UNESCO-designated Site of Memory. As yet, no local committee has been formed for Deweyville, although Houston resident, descendant of enslaved Africans in Texas, and MPCPMP state coordinator Joan Hubert continues to research the area. To date, there is no documentation of arrival for Corpus Christi, a major port on the Gulf of Mexico. Please follow these links to read more about Texas and slavery and find resources for additional information: https://www.libraries.rutgers.edu/rul/projects/arachne/vol1_2adorno.html
https://tshaonline.org/handbook/online/articles/yps01
https://core.ac.uk/download/pdf/72736087.pdf) https://face2faceafrica.com/article/the-abolished-atlantic-slave-trade-was-renewed-in-this-texas-island-by-pirates-in-the-1800s